The Vicar of Dibley? 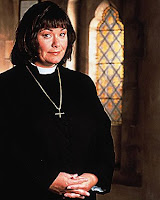 “Why are you people still so obsessed, after all this time, with women’s ordination? Surely the Anglican crisis is not about who can be ordained, but really concerns moral theology; our difficulties flow from the widespread abandonment within our Church of biblical standards of behaviour, largely over the issues surrounding human sexuality.”
Up to a point; yet whatever false and unbalanced stance the Church in any one generation may take in terms of its moral theology (and, of course, the Catholic will say we can have no moral theology except that of the Universal Church) it is always possible in the next generation to repent of it.
In terms of the crisis facing us, women’s ordination to the priesthood is far more of a problem and the ordination of women to the episcopate is the onset of nuclear winter as regards the survival of catholic sacramental life within the Anglican setup; there can be no rowing back from a decision of that magnitude, because sacramental uncertainty is enthroned at the very heart of the life of the Church, along with the resulting fracture of communion among us and the shattering of all our ecumenical hopes and dreams. As Anglican Catholics, in the eyes of the liberal “elite” which governs us, we are the visible reminders of that sacramental uncertainty, which is why we must be driven out.
“The friendly lady vicar with the colourful jumper” (to quote a wickedly funny Mitchell and Webb comedy sketch) has become as much a part of “ordinary” Anglican parish life in England and Wales as milky tea and the smell of mouldering hassocks in country churches (my own excluded, of course!) It’s not a matter, as some very influential commentators have maintained, of the abandonment of biblical values bringing about the existence of two religions within our Communion: the problem of the two religions has been around for some time in the person (however individually sincere and well-meaning) of “the friendly lady vicar with the colourful jumper.” And that is the case whether or not she herself realises it or has herself signed up to the modernist agenda.
As the more perceptive among the radical modernisers knew all along (so did their critics – we all remember being derided in the 1980s for pointing out the probable implications of breaking with the tradition of a male priesthood) all else follows from this one change. That is why women’s ordination had to be successfully pursued whatever the cost.
Now the citadel has been stormed, all that remains for those who still resist is either on the one hand to try to negotiate terms of surrender (of course, ultimately there will be no acceptable terms offered - the ultimate irony is the adoption by liberal revisionists of the maxim “error has no rights.”) or to try to disengage and march away into an uncertain future, but with our tattered banners still flying.
Posted by Michael Gollop at 12:30