“Blest by the Sun, the olive tree…” 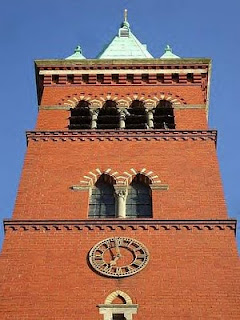 Holy Nativity, Knowle
Some thirty or so Welsh priests (and a deacon) and several coach loads of the faithful braved varying degrees of celtic episcopal displeasure and joined the Bishop of Ebbsfleet for his Chrism Mass at Holy Nativity, Knowle in Bristol today. It was wonderful, too, to see Bishop David Thomas, the irreplaceable and, of course, not replaced, former Provincial Assistant Bishop, recovered enough after his recent illness to take part in the Mass with Bishop Andrew.
Over the last few years the chrism masses have become  rather bitter sweet occasions for many of us, not simply because we have been denied a Chrism Mass 'of our own' in Wales (one presided over by an orthodox bishop, that is), although there is a great deal to be said anyway for uniting with our brethren in England for this and, indeed, other gatherings of importance, liturgical or non-litugical. No, they are bitter sweet because they are also reminders of the uncertainty hanging over us in the deepening crisis of faith and belief which now has our part of the Church firmly in its grip. “Will this be our last Ebbsfleet Chrism Mass?” was the unspoken question hovering on many people’s lips today. What will the future hold for Anglican Catholics, and for us as individuals within the catholic movement? Where will we be this time next year?
But with our priestly and diaconal vows renewed in the presence of a bishop who actually believes in the apostolic ministry, and the holy oils consecrated and renewed in our aumbries for another year, we are now able to join with the Lord and set our faces towards Jerusalem as another Holy Week begins.
And we take with us to the foot of the cross the gathering crisis, the provisionality of all that we now do, our doubts and fears and hopes for the future, as we experience the saving events of next week. And we can do so in the knowledge that the victory has been won and that the new life of the resurrection is promised us. The Lord will bring us to a new experience of resurrection and a new ecclesial life as members of his Body. In the meantime, while our sojourn in 'the house of bondage' continues and before the waters of the Red Sea are parted before us, we must keep faith and not despair. Despair - some say, the real sin of Judas Iscariot-  is the only unforgiveable sin, the sin against the Holy Spirit himself. 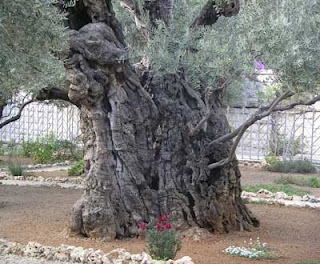 An ancient  olive tree (it's thought to be about 2,000 years old) in the 'Garden of  Gethsemene'

This is a season when the olive in various ways plays a significant part in what we do. Olive oil is blessed at the Mass of the Chrism and used for the holy oils of Chrism, of the Sick and of Catechumens.
As the liturgy says:
“In the beginning, at your command,
the earth produced fruit-bearing trees.
From the fruit of the olive tree
you have provided us with oil for holy chrism.
The prophet David sang of the life and joy
that the oil would bring us in the sacraments of your love.
After the avenging flood,
the dove returning to Noah with an olive branch
annouced your gift of peace.
This was a sign of a greater gift to come.
Now the waters of baptism wash away the sins of men,
and by the anointing with olive oil
you make us radiant with your joy....”

Later, on Maundy Thursday, the Lord will pray with his apostles in a garden of olive trees (the word Gethsemene means ‘olive press.’) and one would like to think that at the garden tomb when the pascal mystery was first revealed the rays of the rising sun were filtered through the branches of the olive, a tree of peace and of hope and of life.
There is an intriguing, if not provable, theory that some of the ancient olives now growing in the garden many believe to have been Gethsemene were young trees at the time of the first Holy Week and may have been silent witnesses to the Lord’s agony in the garden before he was given into the hands of wicked men.