My attention has been brought to a post [here] written in May this year on the always readable and thoughtful Ordinariate Pilgrim blog:


"....I disagree again with Fr North when he describes ‘the bitter half-life we have lived since 1992.’  This was the second half of my ministry as an Anglican priest, and it had many times of sweetness and full-life! We learnt a new relationship with our (flying)  bishops, one based on respect and trust. The fraternity among priests was strong, and we taught with a new urgency and clarity.  Our congregations grew in numbers and faith. But other parts of the C of E were not happy. It was they who had voted in the system which gave us alternative bishops, but as a former Bishop of Southwark remarked to a group of us, ‘If I had realised that I was not going to be able to celebrate the Eucharist in your churches, I would never have voted for it.’  Clearly  he had voted for a gesture, to make the majority look magnanimous, but only to last for a few years while the Anglo-Catholics conformed or left. It was not our refusal to allow him to preside, so much as our renewed strength and growth which horrified him. As Geoffrey Kirk pointed out to me when we were neighbours in Lewisham, our two churches had more people worshipping in them on Sundays than the whole of the rest of the Deanery put together.  In any other field we would have been ‘models of good practise.’  But rather like the railways and the leaves, our two parishes were producing the ‘wrong sort of growth’.   I went to Synod and Chapter, I was courteous to my women colleagues, I wrote and spoke about mission and I called for reform and renewal – but I was constantly faced with the fact that, in order to participate in any way in the life of the diocese, one had to accept the ministry of women priests.  It was deliberate and coercive.
Fr North ends with a stirring cry to Anglo-Catholics to enter the fray again. I responded to such calls as a young priest in the 70’s. I picked myself up again in middle age and entered the struggle (gladly, not bitterly) in the 90’s.  And now I have gone where Anglo-Catholics have always longed to be, which is in restored communion with the worldwide Catholic Church. Pope Benedict held out an invitation, and I have yet to hear a convincing argument against accepting it. Fr North, having said, ‘We have declined it’ gives no reasons.  He is right when he says that in saying ‘no’  ‘we have re-committed ourselves to an Anglican future.’ But that Anglican future is not a Catholic future – and now never can be.  The two opinions are not ‘threatening to leave and then never quite doing so.’ The two opinions are being a member of the Catholic Church, and being a member of the established Church of England. Once I thought I could be both: now I believe you can’t. To re-write Father’s last sentence:  ‘the Church of England changed, the Anglo-Catholics left, and those who stayed are facing death.’"

In the light of the recent catastrophic developments here in Wales and what seems more likely than not to be a similar denouement in the Church of England, we owe it to those to whom we minister as priests to give a much better response as to what the future holds for  Anglo-Catholicism within the increasingly inhospitable and unrecognisable structures of the Anglican Communion.
At the moment I have to confess that, with our prospects for survival firmly in the hands of those who are our theological enemies and whose own theological outlook is decidedly inimical to Catholic faith as it has been believed and understood (at least up to this present generation of Anglicans) I have as yet no answer to give as to how we can in any way commit ourselves to "an Anglican future" (certainly as defined above) when we are firmly - and not so politely - not so much being shown to the exit but frogmarched to it  .....

Wales is a very small province; for some of my generation these verses from Psalm 55 have a somewhat bitter ring of truth to them:

For it is not an open enemy, that hath done me this dishonour:
for then I could have borne it.
Neither was it mine adversary, that did magnify himself against me:
for then peradventure I would have hid myself from him.
But it was even thou, my companion:
my guide, and mine own familiar friend.
We took sweet counsel together:
and walked in the house of God as friends. 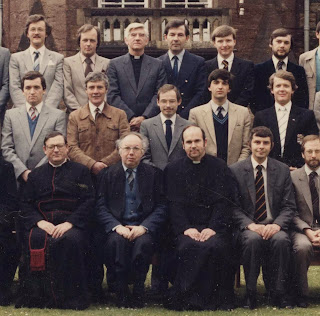 Morten Lauridsen - from Mid-Winter Songs, a setting of words by Robert Graves

Posted by Michael Gollop at 21:23 No comments:

At the Shrine of St James the Apostle..... 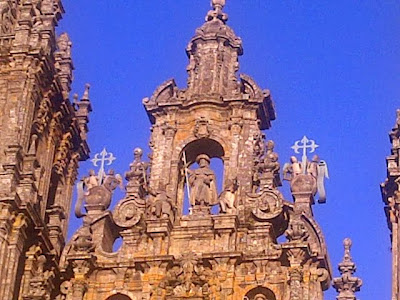 I've been back from Santiago de Compostela for a week or more now. It's been very difficult to think of what to write here, or, indeed, what future this blog may have in the new order of things in Wales.

News of the Welsh Governing Body's  decision reached me in Spain the same day, although it took a while longer to discover the full enormity of what had happened.
Two observations: the first is the confirmation of the intrinsic amorality of the Synodical system and therefore its complete incompatibility with an authentically Christian form of ecclesial governance. Anyone who now, while supporting women's ordination, may have hopes of clinging to a form of doctrinal orthodoxy must fear for the future.

Of course, those responsible for the 'ambushing' amendment which scuppered the loudly trumpeted - and even widely praised - plan of the Welsh bishops to implement a two-tier legislative process for the admission of women to the episcopate (whilst providing for the needs of those opposed) will have to answer to their own consciences. I'm sure they will find no difficulty in that.

As for the bishops themselves, their unanimous support for the final (and unrecognisable) legislation should put to rest any question as to whether they can either deserve or expect the trust of traditionalists in Wales. Having said that, one must have a certain sympathy for them. They can now only act in so far as their radical feminist allies will allow them. Faustian bargains are like that. That does, however, have ominous implications for any code of practice for the traditionalist integrity which may eventually emerge from the current 'exercise' in consultation.

At the shrine of St James the Apostle I knelt and wept for the Church in Wales and the cause of Christian unity...
.
Posted by Michael Gollop at 21:00 2 comments: