Two reports today bring home to us that we are living in a new ecclesiastical era in a rapidly changing world. 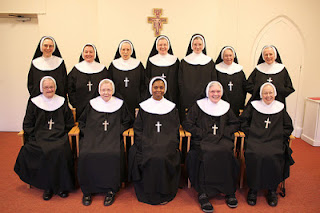 Photo: Personal Ordinariate of Our Lady of Walsingham

The first [here] from the Ordinariate in the U.K.  is news that eleven members of the Community of St Mary the Virgin at Wantage, together with the Convent's Superior,  are to join the Personal Ordinariate of Our Lady of Walsingham. 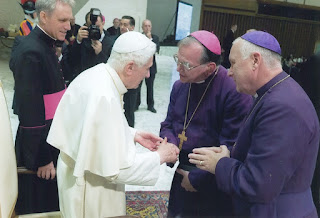 The second [here] from the American Anglican Council,  following on from reports of a visit of some ACNA bishops to the Vatican, speaks of the possibility of 'a new convergence of Confessing Christians.'

Quite what the response of the Anglican 'establishment' will be to these developments, and more like them over the following months and years,  is anyone's guess - my prediction is that it will be 'business as usual.' * - a continued headlong pursuit of fashionable innovation while the Communion disintegrates around them, and many faithful Anglicans are forced to seek a more secure and apostolic refuge elsewhere. I say this only because the establishment quite simply lacks the imagination - some might say the ability or the willingness to discern the signs of the times - necessary to change course.
I was going to say before it is too late - but clearly, audibly, the fat lady is already singing ...

* The real implications of what is happening around them will not register with the average Anglican bishop in the west, much less those who clamour for radical change on our General Synods and Governing Bodies - not even a cloud the size of a man's hand ...
Posted by Michael Gollop at 17:18